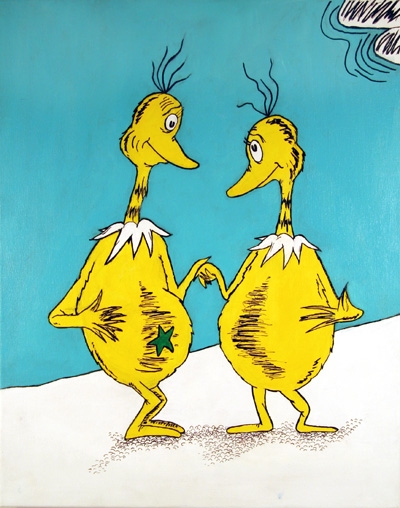 So, I’ve been making more underwear. I’m aware I’m in danger of appearing like some kind of hardcore off grid sewing freak, but hey. I have no intentions of making all our underwear, I just don’t like to waste pieces of fabric bigger than my hand I guess, and when the fabric in question is knitted, there’s not a lot of uses I can put it to. So, I shall continue to make underwear unabashed while it interests me (I happen to know a boy who’s keen to have homemade pants too, he doesn’t like to miss out on ANYTHING) but I will doubtless pay the ubiquitous M&S underwear department a visit in the future too. Also, I like to make useful things, so I’d rather make underwear than a fancy dress I’d never wear.

interjects the Man. (He says the nicest things). 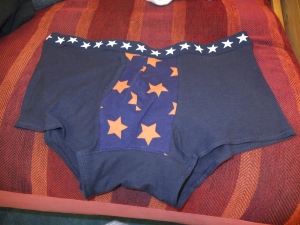 In case you can’t tell, this is the front…

This time, it’s more comox trunks with the scraps of some cool fabric I bought half a metre of for no good reason (darn you internet) and used in part to make The Boy a T shirt, plus the rest of a t shirt I bought from a charity shop (to make into contrast sleeves for my favourite t shirt). 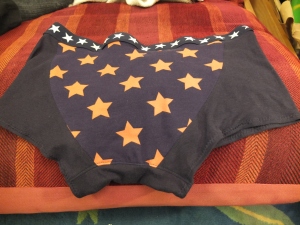 …and here is the back

But other than fabric choice, the difference to how I made these trunks before is twofold. First I used some “proper” elastic that I spied on the My Fabric website. Last time I used the waistband of an old pair of pants but that isn’t always going to be an option. The first time I used some ordinary elastic and it doesn’t quite look right and I suspect isn’t as comfy to wear. This stuff is great, really soft and strong, but I could only find it with stars on (or with zebra stripes or floral), so it won’t go with everything (I thought it would look incongruous with viking graffiti for instance). So yes, a large part of my reason for making this pair was to try out this elastic. I have since found some plain navy stuff locally and snapped a couple of metres up (the shopkeeper told me he can’t always get hold of it).

And the second reason this pair are potentially interesting? Well, I had some feedback on the vikings, and The Man prefers my bodged I-Can’t-Follow-Instructions-or-Get-My-Head-Around-How-Men’s-Underwear-Works first pair – which have the internal access point underneath (if that makes any sense, I’m thinking there is probably specialist vocabulary for this) to the second As-Thread-Theory-Intended pair with internal opening on a level with the external opening but on the opposite side. (I believe he may have muttered something about Canadian Men being S shaped). So, for this third pair, I went for Planned-Modification-to-Openings-To-Mimic-Shop-Bought-in-UK-Pants.

In case anyone is interested in recreating/improving on/marveling at my method, it happened thus: 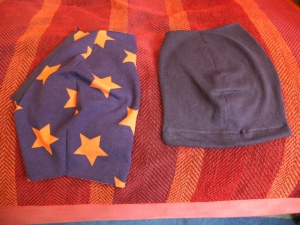 For the outer front cup, after first double checking with the wearer the preferred side to have the opening, I cut one piece 1A and one piece 2A in my star fabric and proceeded as directed to assemble then. For the inner front cup, I cut one piece 2A and one 2B in the navy (there wasn’t enough stars left) and joined them at the centre seam. Then I folded over the bottom edge by a cm, folded it over again and stitched it into place. Thereby making it an entirely unscientific about right looking amount shorter. 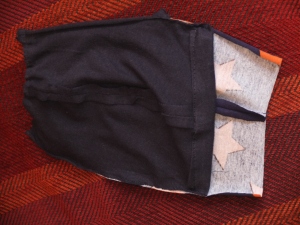 Then I basted the two pieces together as per the instructions, except obviously I only had one bound opening to beware of at the top and I didn’t need to baste the bottoms edges together. Then I assembled as normal. The result got a thumbs up from hubby.

Oh, I just remembered, I tried zig zagging up the hems on a wider stitch length this time and they came out just fine, no frilling, so that must’ve been the problem last time. Also, I wanted all of the elastic on the front, so I carefully attached the trunks on the inside to the bottom of the elastic with a zig zag, so I wouldn’t have to flip it. (If that last sentence makes any sense to you then your comprehension is surely better than my explanation.) The navy band at the edge of the elastic hides the stitches nicely. Good star elastic.

I have at least one more pair planned, but they will be a little different….

14 thoughts on “Stars Upon Thars”