So, Thanksgiving has been and gone and Cyber Monday is upon us (‘scuse my lack of enthusiasm for all things Salesy – I am, in theory at least, trying to lead a simple life and try and eschew such things) and I’m sure the burning question on your mind is “Did she make any jeans in the end then?”.

The answer is a resounding Yes and the count is somewhere between 1 and 3, which admittedly is a bit vague but I can explain. One pair started from scratch and finished during the Sew A Long, one nearly finished pair hoicked out the Box Of Broken Dreams and completed, and one pair oh-so-nearly-just-in-need-of-a-waistband-finished. And they are all Liana’s, which along with the Liana hack I made this summer, means I have 4 pairs to show you. So I thought I’d do a line up. 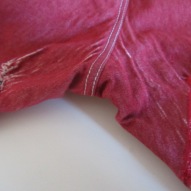 First off though, the reason why I needed so many new pairs (I have non stretch denim for 2 pairs of Morgans in the cupboard too). Namely the woeful state of my current jeans.   Here are the before and after pics of the  two pairs of jeans I tackled from the mending pile during the sew a long (I have taken my tacking stitches out now, don’t worry).    My jeans pile was really quite minimal before I started (yup, just 2 pairs plus my stripey trews), which mean they get a lot of wear, and the Liana’s were made from some locally bought denim that was a little on the cheap side quality wise. The red foxy jeans were made from some lovely soft red denim, but alas whilst I think the quality of that was good, it just wasn’t hardwearing enough to put up with the constant rotation it was under.

Anyway, at least it was easier  to get these two pairs mended as I had the denim needle in the machine anyway, plus I needed to do this to keep me decent whilst I made the other ones, and  as a bonus it served to remind me why it was sensible to try and make so many pairs of jeans.  I used this method to mend them and can heartily recommend it if you find yourself in a similar situation.

I’m a bit annoyed with myself for letting these jeans languish on the mending pile for so long. I think I was in mourning for all the effort put in to making something that started to fall apart so quickly (especially the Liana’s). However, I have given myself a good talking to, after all, if I hadn’t made the Liana pattern with some easy, cheap, local fabric I wouldn’t know how well they fit me, giving me the confidence to make some more in better fabric would I?  And if I’d bought the good/expensive/online stuff for the first pair it’d probably still be sat on the shelf with me too terrified to cut into it.

Anyway, enough wittering for today, I am determined to get some decent photo’s tomorrow (no easy task at this time of year in the northern hemisphere) and start showing you what I made…

One thought on “Liana Line Up – The Warm Up”