Arty shot of The Girl putting her finishing touches on a birthday card before this cape got wrapped and taken with the card to a party. 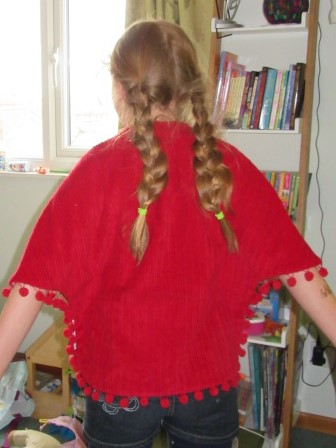 A less arty shot, but a better representation of the colour and you can’t see the fact I had to piece the back of this Forest Path Cape in this shot. 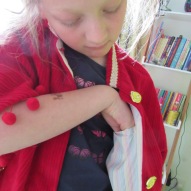 I was inspired to make this one after seeing her friend slyly feeling the pom poms on her Princess Anna Cape, the red elephant cord was lying around in my stash and I was in the mood for making. I found the rainbow stripe polyester shirting in my stash too and it thought it would make a great lining. This time I added a welt breast pocket in the lining because every Tsarina needs a pocket, right? Talking of Tsarina’s, that wasn’t the look I had in mind, I mean I knew it would have to have pom pom trim, but I didn’t expect the girl to choose such shiny gold buttons (which were a pig to sew on).

I drafted a mandarin collar the same way as last time and used this braid chosen to match the buttons. There was just enough left for a hanging loop. Anyway somehow the thick red stripes of the cord manage to combine with the trim and buttons to make a very regal, opulent looking cape, despite the fact it’s machine washable. Hopefully it’ll get a lot of wear.

Oh, and I nearly forgot, it’s the first of May today. Which for LSH meant getting up at 4.15am so that he could be morris dancing on top of a hill when the sun rose. (The rest of us caught up on some sleep prior to a day of visitors, birthday parties and cooking). Anyway, for me, the first of May means Me Made May of course. So I better sneak my Crafting a Rainbow inspired pledge in on the line.

“I, Prolificprojectstarter, do pledge to wear something I’ve made each day in May 2016, to keep a track of my colour palette and to mend at least one thing each week”.

I wasn’t sure how to up my ante from just wearing a thing I made each day like last year, without making it too difficult (I’m not up for a huge challenge right now), but keeping track of colours will be interesting and I’m also keen to tie in with Jen’s Mend It May.

So, for the record, today is brought to you by the colour blue, I’m wearing navy jeans a mainly blue (with a hint of yellow) drapey top, and a navy and green stripe top from Seasalt.

So, bright May Day greetings to you, and for those with an extra day off due to the Bank Holiday in these parts tomorrow (assuming you’re not having to work it), I hope you make the most of some extra free time tomorrow.

Right, first off, before it’s too late,

I, ProlificProjectStarter, pledge to wear at least one Me Made item every day in May.

Last year was my first MMM, I think I pledged to wear something me made 3 or 4 times a week and I actually managed to wear something every day. I now have more self sewn stuff in my wardrobe and wear a lot of it often, so lets see where the pledge leads me to this year.

Second, I’m going away this weekend, so I decided to find out a sock pattern so that I have something to do while I’m traveling. This is my first attempt at socks, I bought some pretty bamboo needles especially as I didn’t have any small enough. Fingers crossed I don’t get Second Sock Syndrome.

Lastly, I finally have some photo’s of my Ottobre jeans!

As easy as falling of a brick

So, the fit is definitely not perfect. But it is wearable as proven by the amount I’ve been wearing them.

I was actually directed to “stand on that brick” by my photographer. Serves me right for nobbling him on his way to work I suppose.

My mum declared them to be very well fitting and I didn’t even ask her. (This is an amazingly positive comment from a woman who is not known for mincing her words). 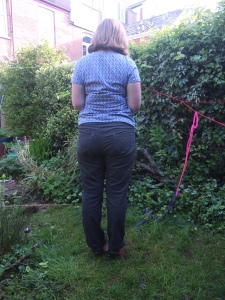 And I may have shown off and told people I’d made them a couple of times. To general amazement.

(Is there an ok way to show off your home made clothes to people who don’t sew?)

Ugh, ugly fold of fabric at the front

So, to make sure I don’t focus too much on my failure for perfection, here are my shop bought jeans. My only pair (and these were only bought after many demoralising tries to find something halfway decent).

and a few wrinkles at the back

I think my homemade ones fit better.

basted first fit, no zip at this point

My muslin started with an inch seam allowance. Which meant after my first basted fit I could extend the crotch length a little, which has improved the fit, but I think I will add more crotch length next time. (Initially I just added length to the front pieces, as I did on my Junipers, but I went back and added it to the backs as well which improved some of the smiles at the back too).

The other fitting adjustment I made was to pinch out some of the baginess at the centre back. I just altered the back centre seam so it curved in. I’m not sure that was the “right” thing to do but it has helped.

So, now I’m off to make sure I have some Me Made Clothes packed for my weekend away so I can get my pledge off to a good start. And who knows, maybe I’ll manage to get a second, slightly better fitting pair of jeans before the end of the month. (I can dream, right).

I decided I needed some new Tailor’s chalk. I have a box of stubby rubbish bits of Tailor’s chalk, some bits of which may well be older than me and none of which work well. I had a sudden realisation that if I bought some new stuff it might have sharp edges and actually work. The thrifter in me wanted to use up all the old stuff first but I pointed out to her that it’s pretty unusable and we could give the old stuff to the kids to use as plain old fashioned chalk. I was near a bead shop with a haberdashery department, but their suppliers had just failed to deliver any tailors chalk as they were out of stock, so I left with some pencils instead. I’ll let you know how that goes.

(At this point you have to imagine the chalk and the pencils as after a dozen times trying I can’t get the photo to upload).

Also, I saw an advert for a trouser making class! Previously the only locally available classes I’ve come across have been of the learn to use your sewing machine/make a bag/sew a simple skirt variety, except for one last year that was for making a coat, but you had to make their coat pattern and it was not my style. So, I have signed up for 5 weeks of zippered fly trouser making madness (well, five 2hr classes). I’m hoping this will mean I can finally make up the trouser pattern I bought on New Year’s Eve 2013 which has some slightly garish fabric from IKEA set aside for it, then I can conquer my fear of fitting trousers (I think I did ok on the zipper flies on my moss skirts and I can certainly do seams and waistbands, so this must be what’s holding me back) and TAKE OVER THE WORLD. OK, so, maybe not take over the world, but seeing the trouble and stress I go to in order to buy expensive, badly fitting trousers that don’t last well, this would be a really useful skill for me to have. I am also going to steal Jenny from Cashmerette’s most excellent idea to photograph myself in shop bought trousers I own so I’m not comparing my efforts with some unrealistic Plato Ideal of Trousers.

Finally I’ve taken the 2015 Stashbusting pledge. I’ve been in the facebook group for a while, but didn’t get around to doing the pledge as I joined part way through the year. I pledged to make at least 12 items from stashed fabric (1 a month, can’t be too hard, right?) including some trousers and also to keep track of what I’m buying and how much it costs, which will hopefully lead to some more careful considering before splurging in future. I’d like to count only fabric bought before 2015 as stash for my pledge, hopefully all fabric bought this year will be for specific projects and made this year, but I haven’t actually stated that so there’s some wiggle room for me if I need it later.