I’ve just got back from having lunch two of my friends – a great opportunity to interrupt each other, swear and generally put the world to rights. Somehow one of my friends got talked into being Vegan for a month and for reasons that I’m not entirely sure of, that then meant I had to to make vegan brownies to bring for pudding. 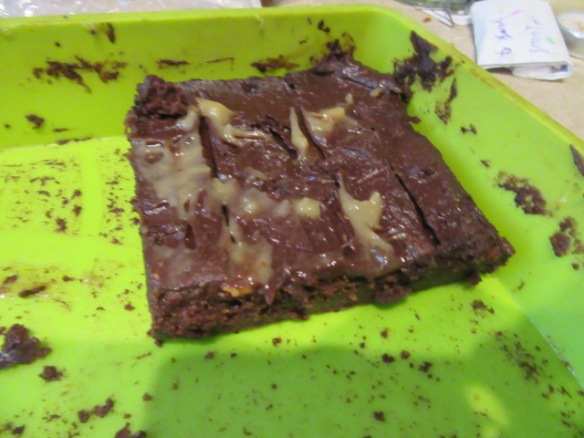 Which is why LSH found me “doing crazy things” aka starting to cook nut free vegan chocolate brownies at 11.30pm yesterday.  The nut free bit isn’t so easy to achieve in conjunction with the vegan bit, but a necessity for me cos of my over zealous immune system.

The brownies were a great success, this is the bit I took home, looking slightly the worse for wear after being chucked in my cycle pannier.

For my future reference, for my friend who liked them and for anyone else wanting to cook such a thing:

So there you have it. Perfect to have with your coffee on a sewing break.