Production line sewing, three bags, made from three canvas remnants from my “bag stash” that were bought from my local fabric shop.  Two to be gifted this week and one spare.

The broad stripes lead nicely to a little playing (and you gotta have a pocket, right?). 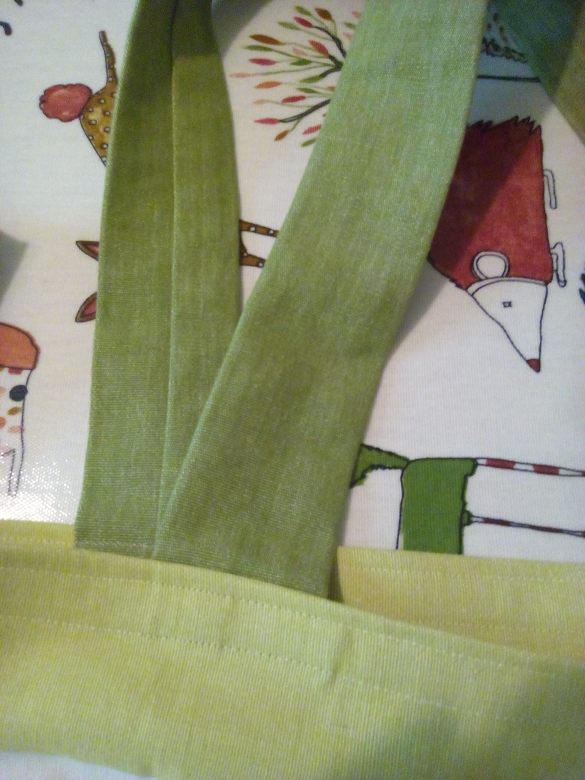 These totes are pretty roomy and have nice thick straps to help spread the load.

Plus the ubiquitous mitred corner. Oh and solid colour base, cos white would not be practical!

Hopefully they will all gets lots of use.

Long Suffering Husband is pleased that he has his bag back after it finally made it to the the top of the mending pile. Home made stuff does kind of implicitly come with a free fixing service after all (but The Boy points out that the turnaround time can be somewhat erratic). I even washed it for him too. 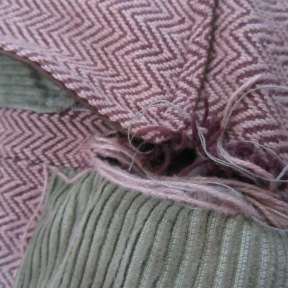 Take one tired projectstarter, feeling two urgh to start a new project right now and reduced to surfing the web instead.

Add the inspirational Kelly Hogaboom to invite me to a Kickin Jeans sew a long.

Hide the jeans I have that I’m half way through fixing.

Find some outgrown purple jeans on the mending pile instead with a hole in the knee. 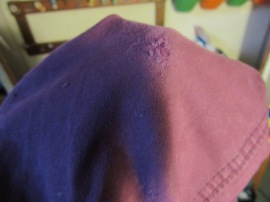 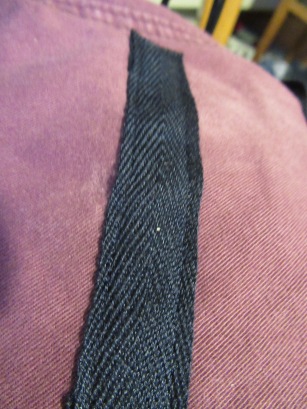 Unpick side seam (the side that isn’t flat felled so no stitching is visible from the outside).

Add some Twill tape to cover up the hole in a decorative manner.

Sew up side seam and finish raw edges.

And what do you have

#menditmoday (ok, techincally it was Sunday, but you’ll give me some lee way on that right)

So, the Boy got a tummy bug and got sent home from school. My children have a combined age of approx 20, so needless to say I have dealt with a few tummy bugs in my time. Never have I seen someone laid so low with one though. It wasn’t the typical symptoms so much that were extreme, more his general demeanor, listlessness, staring into space-ness, asking for help to sit up, not reading and barely talking. On Day 5, when he still wasn’t eating at all or showing any signs of improvement, I consulted our GP, which led to him being sent to the hospital to rule out appendicitis. It wasn’t appendicitis (the official diagnosis in the end was viral gastroenteritis), but he did end up getting admitted for 3 nights and put on a drip to counteract the dehydration.

It was a busy week. Sitting around doing nothing at the hospital is surprisingly exhausting. Taking my turn being the parent at home with The Girl was surprisingly stressful too. So I decided to make the Boy a t shirt. Ostentatiously that was to cheer him up in the hospital, but really, it was to take my mind of things, which is good, as I didn’t finish it until several days after he got home from the hospital.

Being unwell brings out the Aspergers side in my son, and as well as being the exact opposite of his normal chatty self at the hospital (one member of staff commented on how shy he was and I had to explain that he’s actually very outgoing usually, which is one of the reasons I knew he felt so ill), it also seemed to ramp up his sensory sensitivity and he kept complaining that his t shirt was too restrictive around his throat. By the time he was admitted to the ward, he’d stripped of his t shirt and covered himself up in a blanket instead and after that he couldn’t have put a tshirt on if he wanted as by then he had a line in his arm. We took some shirts in to the hospital so that he could wear them as unbuttoned as he liked, but mainly he rocked the bare chested “look you can see even more of my ribs than normal” look.

Hence I chose to make no 37 from Ottobre 03/2016 , a raglan Henly style t shirt with stripes up the side, because I thought he could undo the placket and it would feel less restrictive.  Great plan. The downside of the plan turned out to be that I had to make a placket.

Tracing and cutting went well. I made it in a size I was pretty sure had some growing room (as he wasn’t there to measure), but cut it to the length of the pattern 2 sizes up, for my string bean. At this point I was still delusional that I would finish it in an evening and take it with me to the hospital the next day. Ha.

Mistake no 1: The t shirt was made on a whim so I used scrap fabric that I had in. The grey knots was the only thing really suitable that I had to hand, and I decided to brighten it up a bit with the red (after all what is the point of a faffing around with an extra pattern piece for a side stripe if you never notice it). This was my first mistake as I think the red is a 4 way stretch and it shifted like billy o when I tried to wrangle it into shape and sew it down. Particularly troublesome on that placket. Which brings me to…. 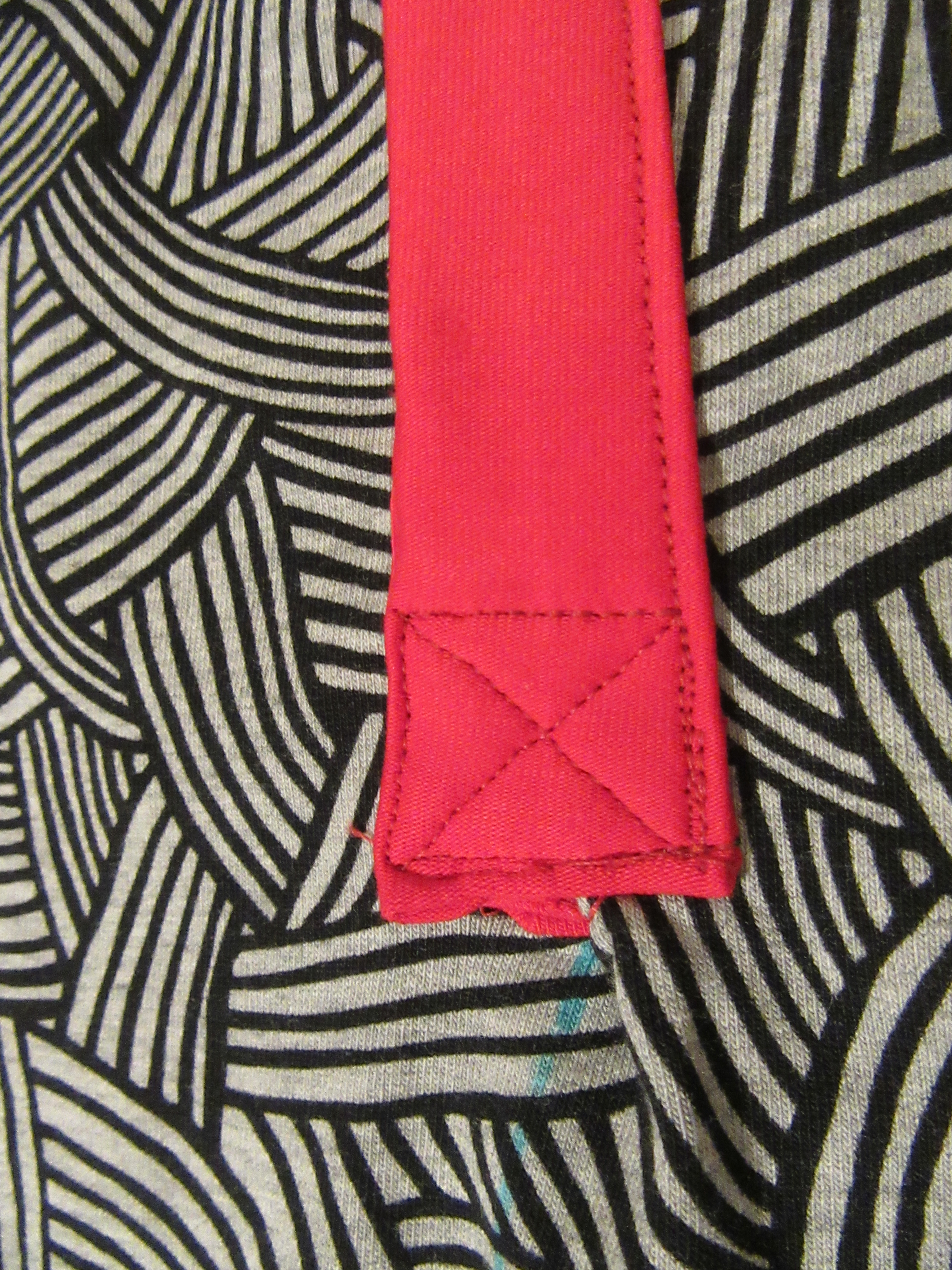 Mistake no 2: I tried to follow the Ottobre Minimalist Diagrams Are For Wimps Instructions when inserting the placket. This didn’t go well and I ended up with the hot mess you see above. After sleeping on it I decided to recut the front and try again.

Second time around I used the Thread Theory placket tutorial for their Strathcona henly t shirt. To make this work I cut the placket piece on the fold, rather than as two separate pieces. I didn’t quite follow the instructions to the word, but it went sooo much better this time again. Definitely still room for improvement but liveable with.  The sharp eyed may notice that this placket is the “wrong” way around, that’s because despite tacking the other side, it stretched as I was sewing it and has little tucks in. Grr.

Mistake no 3:  Prym poppers. Past experience shows that no matter how many times I reread the instructions or do trial runs on scrap fabric (ok, actually I did 0 trial runs this time), at least one of them always screws up on the real garment. I’ve never had the inserty applicator thingy jam onto the popper before though. Turned out it was due to the popper front and back being misalinged. Another sleep on it moment, before then taking apart with pliers and carefully lining up the replacement popper through the holes it’s predecessor left behind before attaching it.

Mistake no 4: I then sewed the original front with the awful placket to the rest of the t shirt and had to unpick the triple stretch lightening stitch raglan seems. Urgh.

The neckband isn’t technically a mistake, but I did follow the Strathcona instructions and tried the slanty edge look and it’s not entirely successful. In particular I’m not happy with the scruffy insides showing when it’s worn open.  However I am now officially past caring.

Because tis done now.  And it looks ok, although I wouldn’t want to subject it to close inspection from someone who knows how to sew. I think it has a bit of a cycling top vibe to it.  But most importantly The Boy is now home and on the mend. He hasn’t really passed comment on the new t shirt, but he did chose to wear it.