Hi there, how’re you doing? I hope the sewing gods have been keeping your bobbins full and lining up your pdf’s for you.

This week I have (probably unrealistic) plans for 3 woolly things with linings. This is the second started and the first finished. As The Boy decided to make his sister a dress for his birthday (blog post coming soon, well, as soon as he finishes it), I ditched my original idea of making her a dress (I didn’t want the competition!). Instead I decided to use the Oliver and S Forest Path cape pattern 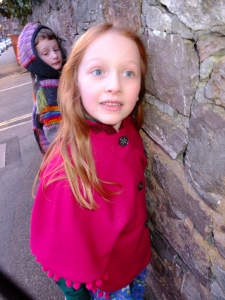 Any resemblance? (excuse the photobomb)

I couldn’t find the fabric I wanted locally, so after a lot of dithering I bought some wool suiting online. Turned out I did too much dithering before purchasing, as it only got here the day before her birthday. Having given up on it getting here in time, I then rushed out to gather the other supplies needed and planned an evenings sewing to get it finished in time. Only to end up falling into a deep sleep before the kids bedtime due to unexpectedly having to take medicinal antihistamine (note to self, don’t believe the manufacturer when they say they’ve listed all the potential allergen ingredients in bold, read the non bold items too, just in case). Probably a blessing in disguise as there’s less pressure to rush when you start a project after the deadline.

The fabric is from Remnant Kings and is described as “Colourful cerise lightweight coating wool. Ideal for a light summer coat or suit … 30% Wool, 70% polyester … Dry Clean Only”. It was more than I normally spend on fabric, but I only needed a metre and I’m really happy with how the end garment looks. Note to self, sewing with decent fabric has the potential to make your creations look more professional. However, the fabric doesn’t seem so very different from the cerise boiled wool available locally at half the price. I’m not sure how different as having initially dismissed the boiled wool, I’m loathe examine it in more detail only to discover it’s the same stuff. Oh well, like I said, I only bought a metre.

I also washed it on a wool cycle in the machine. Despite it being dry clean only. I was using Lladybirds theory of treat it how you want to treat the garment before you start. It seems to have survived fine although it stank of germaline when wet, presumably something they’ve treated it with. 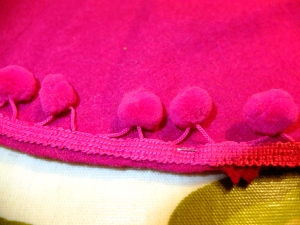 I put bobbles on to mimic Anna’s cloak. I nearly didn’t, because they are so twee, but I knew my daughter would love them. They were the end of the roll and not quite enough, I thought I got some matching ones at another shop, also the end of a roll (hmm, local shortage of pink bobbles suggests that I am not the only person to be making something like this), but when I got them home they were bigger and orangier and clearly didn’t match. However, this lot went from the centre back to the curve at the front, so I decided that looked intentional. I attached the ribbon in my seam allowance, bobbles facing inwards, before sewing the main cape and lining together, like you do with piping. It went ok, but then when I clipped my curves I must’ve clipped the tape because one bobble each side under the arm had a snipped through thread and fell off, so I had to reattach them by hand. Other than that they went well.

The lining isn’t “proper” lining fabric, but a heavier fabric that colour matched better, possibly polyester satin, but I’m guessing here. My fabric knowledge is pretty low and the shops I use often have no labels on their fabrics. Anyway, it wasn’t as bad to work with as I feared and has added some weight to the lightweight wool which I think works well. I was good and tacked it in place before pressing it. My old sewing teacher would’ve been proud.

I used this tutorial to draft a mandarin collar. I figured I could always remove it if it didn’t work, but I’m really pleased with it. It’s 2cm high rather than 1″ as suggested, to scale it down a little (and because I had metric graph paper to hand 😉 ) and I changed the height by .5cm rather than 1/2″, but other than that I followed the tutorial exactly and it was remarkably easy. I didn’t bring the collar all the way to the front due to the overlap and I curved the end down. I also stitched some “stuff” on to make it look more fancy (no idea what to call this, not normally by cup of tea). I like how it came out. I was planning to put more “stuff” around the edge of the cape but the Girl vetoed it and I think she was probably right. Sometimes less is more. So now I have several metres of this “stuff” leftover and something similar yet different I bought in green (silly me, shopping without fabric samples so I bought both).

understitching on collar and hanging loop in action

The only other change I made to the pattern was to add a hanging loop to the facing, because why wouldn’t you?

The buttons are just perfect, large, dark wood with a snowflake design painted on. I was so pleased to find those. (Yet I failed to get a decent close up of them sorry). I sewed them on with some vintage button thread I inherited.

I’m really pleased with this make, it’s come out better than I’d imagined and looks really smart, like something that you’d find in a trendy kids clothes boutique (with associated price tag). As we’re coming up to spring here I’m hoping it will get a lot of wear and will take less persuading for her to put on (she doesn’t like layers, but I’m hoping the Anna factor will win her over, combined with the fact that its not fitted in the arms, a coat over jumper is a major uncomfortable issue with that girl!). I’m not likely to make this pattern again in a hurry (I don’t think she needs more than one cape) but if I had a timemachine the only thing I might change is to add a pocket. I realised at the end this doesn’t have one. I think you could get away with a welt breast pocket on the lining. 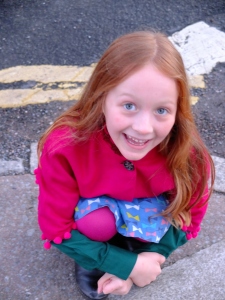 I think she likes it!

The pattern is a super easy make and comes together quickly. The instructions are good and cover things like gathering the seam allowance of the curves before bagging it out to help the lining lay flat – I would never have thought of that. And, with a few minor tweaks, I reckon it makes a good practical every day dressing up item too.

What’s your favourite every day dress up make?